This June at #Identiverse in Boston I had quite an epiphany during Eve and Mike’s session. I finally realized that User-Managed Access 2.0 protocol (aka UMA2.0) is not that complicated to understand and VERY similar to some OAuth2 flow we all know. Let me try and convince you.

Before taking the shovel and digging deeper, remember that UMA2.0 was actually designed as a new grant type of OAuth2 and not as a new protocol. If you already know OAuth 2.0, then you can understand UMA2 in less than 10 minutes. I promise.

Here’s the UMA2.0 grant type in one typical flow:

Do you see the authorization code flow? Let me highlight it to you: 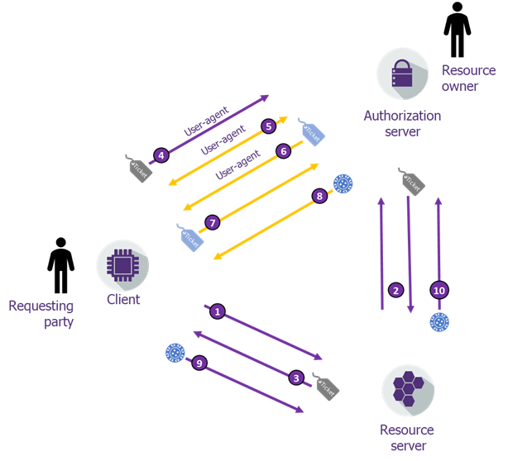 Yes, steps 5 to 8 are VERY much like the OAuth2 authorization code grant.

If you agree to the following approximations, there are really no other major differences:

So yes it is not the same. Yes there are some steps before the highlighted part and it is a tiny bit longer.

Now User-Managed Access has been designed for a reason. And that reason is not to just rename a few OAuth2 artifacts. There are some differences that enable UMA2.0 to work beyond OAuth2 standard capabilities.

Let’s have a closer look at the differences:

What the UMA2 standard achieves (and is actually designed for) is the separation of the requesting party and the resource owner (where OAuth2 considers them to be only one person). And this differentiation allows us to address more use-cases than OAuth2 allows by default:

Special thanks to Eve Maler for her insight while writing this article.