On June 22 and 23, 2019, Wavestone CTF team YoloSw4g took part in the qualifications for the Google CTF Finals. During this CTF, Google has provided many unusual challenges. Among them is Flagrom, a challenge halfway between hardware hacking and software security.

The goal of the challenge is simple and given in the description:

This 8051 board has a SecureEEPROM installed. It’s obvious the flag is stored there. Go and get it.

Four files are provided with it:
At the first launch, a proof of work is required:
$ ./flagrom
What’s a printable string less than 64 bytes that starts with flagrom- whose md5 starts with 55d55d?´
The LD_PRELOAD functionality allows you to bypass the proof of work when executing locally. To do this, simply redefine the exit() function to do nothing:
void exit(int x){
x = 1 ;
}
It is then possible to get an overview of how the challenge works:

Flagrom operates as follows:
Let’s take a look at the firmware code:

The main() function sum up all actions:

All communications with the SecureEEPROM is perform with the I²C protocol. Before going into the SecureEEPROM code, it is necessary to understand how I²C works.
It is a 2-wires master-slave communication protocol widely used in hardware. The first wire, named SCL, serves as a clock to indicated when a signal is safe for reading. The second wire, named SDA, holds the data to be transmitted.

Timing diagram of a I²C communication (source: Wikipedia)
An I²C transaction is a composed of:
After every byte, a special state of SDA and SCL allows slaves to acknowledge (ACK) the reception of data.
I²C specifications define an addressing structure to indicate which slave is the recipient:
Addressing structure of an I²C transaction
For the SecureEEPROM, two addresses are defined in firmware.c:
The messages to the security module do not exactly follows this structure. A 4-bit prefix is used as slave address, while the remaining four bits (bits 4 to 7) are used to indicate which 64-bytes bank to secure.
Let’s now take a deeper look at the hardware description of the SecureEEPROM. It is written in SystemVerilog syntax. If you are not comfortable with it, you should first read the Wikipedia page to understand the basis.
Some procedural blocks are used to keep track of the state of the I²C bus within the program:
The main part of the SecureEEPROM hardware is a Flip-Flop procedural block (always_ff) which defines a finite state machine to handle I²C communications and actions on the EEPROM. 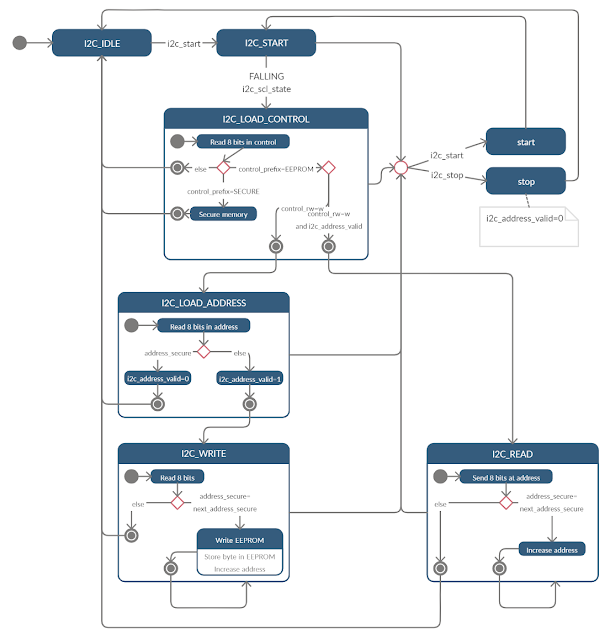 Finite state machine of the SecureEEPROM

The protection of the memory, in the EEPROM, is performed at two stages:
The latter condition is strange: why not only check whether next address is secured? It means that it is possible to read secured address if the current address is secured. However, we cannot load a secured address because of the former condition.
What about changing the security of the current address after loading it?

With this in mind, a path of three transactions can be found to read secured areaFirst load an address in the first unprotected bank and end with a start bit: 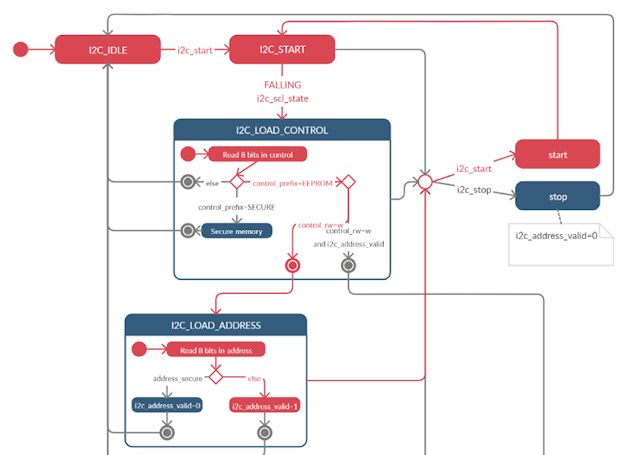 Then secure the first bank:

Exploitation path — secure the bank of the loaded address

Finally, start a read action and read past the current bank boundaries: 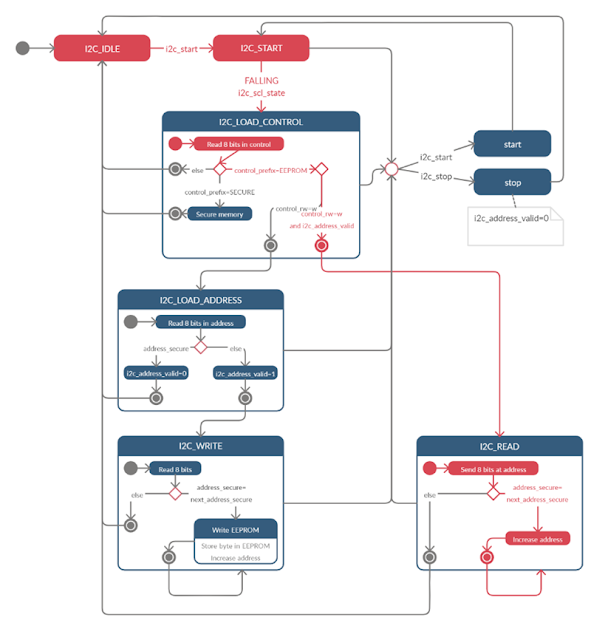 Exploitation from a user code

Now that the exploitation path is known, a user code needs to be written to exploit it. The 8051 microcontroller provides a high-level interface for I²C communications.

It is, however, not possible to change the address within the same communication. A raw access to I²C wires is however provided:

Wikipedia provides an example in C code in the I²C page. It can be used as a base for the exploitation program. It gives two high level function to read and write bytes:

The acknowledgement of the function i2c_read_byte needs to be modified for it to work with the EEPROM. The EEPROM can be exploited with the following code:

The full exploitation program can be found here. On Linux, the compiler sdcc supports Inter 8051 microcontroller and may be used. It generates an IntelHex format which should be converted to a raw binary. Some Python libraries exist to perform the conversion.

The code works just fine on the local instance and we successfully get a fake flag.

Completing the proof of work

To exploit the SecureEEPROM remotely, the final step is to perform the proof of work. Nothing complex in it, just brute force until you find a valid proof. Here is a Python code doing that:

A complete exploit can be downloaded here. It handles the compilation of the user code, performs the proof of work and run the user code.