In 2013, the FBI issued a Stored Communications Act warrant for emails stored in Ireland, on one of Microsoft’s datacenters as part of a drug trafficking investigation. Microsoft refused to provide this information, because the data in Ireland is beyond the jurisdiction of the warrant. In Microsoft Corp. v. United States, the court held that “the government cannot compel Internet Service Providers (ISPs) to turn over data stored overseas, even with a warrant”.

To address this issue, the US government decided in 2018 to amend the Stored Communications Act of 1986 by enacting the C.L.O.U.D. Act.

The C.L.O.U.D. Act stands for Clarifying Lawful Overseas Use of Data Act, a federal law to speed access to electronic information held by providers under the US jurisdiction that is critical to US foreign partners’ investigations of serious crimes.

Scope of accessible Data through the C.L.O.U.D act:

A controlled process for accessing the data.

First, the US authorities invoking this law to request content from all companies under US jurisdiction must obtain a warrant. They must prove a high likelihood of finding evidence, related to the ongoing criminal investigation, in the targeted data, whether the crime is perpetrated by the client or the company itself.

Once the warrant is issued, it must be reviewed and approved by an independent judge.

The request can be issued under orders of secrecy: the legal authorities can delay the CSP (Cloud Solution Provider) from notifying the account holder of the request. Orders of secrecy are examined more carefully by the Department of Justice.

If the warrant is approved and a request is issued, the Service Provider or the client, if notified, can challenge it within 14 days if:

Factors such as the importance of the information, the specificity of the request or the availability of alternative means to obtain the information will be analysed by the court. 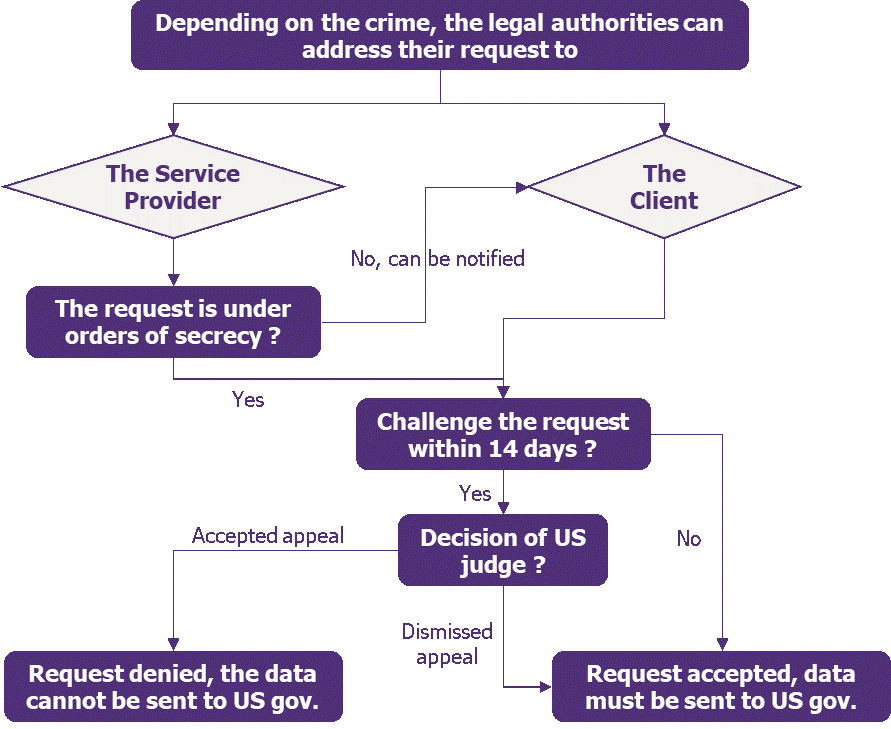 C.L.O.U.D. does not target only Cloud Service Providers! C.L.O.U.D. Act scope is wider than Cloud Providers and include some Software and Providers already deployed in some companies’ IS.

Besides the obvious scope of the RCS and ECS definition (Email providers, cell phone companies, social media platforms, cloud storage services, etc.), many softwares and providers used in most IS are in the C.L.O.U.D. Act scope:

In On-Premise IS, the C.L.O.U.D Act still apply.

The C.L.O.U.D. Act is wider than common expectations and on-premise implementation can give a false perception of protection. Here are two examples of how the data can be retrieved or transmitted:

Many software communicate by design with the provider’s infrastructure (error and user reports, telemetry data). Most of the outgoing flows are encrypted through HTTPS but providers usually do not communicate on the content of the data sent nor precise the destination and, in most cases, these outgoing flows are required to use the service and cannot be disabled.

=> The US authorities can retrieve data desired for the Cloud Act such as individual login, client’s workflows, etc.

Support teams are performed remotely allowing access from provider teams all around the world (included US territory).

For numerous softwares, providers bring foreign support team that can be US-based or under US jurisdiction.

=> The provider or the third party must be compelled to transmit the data in case of a request from the U.S.

What do the Cloud Service Providers say about it?

Cloud Service Providers assure their customers that they will not disclose their data unless they are obliged to do so by law… which is the case if they are compelled by the C.L.O.U.D. Act. In the event of a conflict of laws, such as with the GDPR, CSP further assure that they will take the necessary steps to oppose the US government’s request.

% Content : is what customers create, communicate and store on or through services such as the words in an email or the documents stored on OneDrive

% Non-Content : include basic information such as email address, name, country and IP at time of registration, IP connection history or billing information

% No data found: when the data required by the mandate cannot be found

=> 40% of requests to Microsoft are unsuccessful: no data is found, or the request is rejected.

=> Most requests to Microsoft and AWS resulting in the disclosure of data are for non-content data (mostly login data).

In a geographical point of view, we can identify countries that are the most concerned by those requests for the second semester of 2020 : 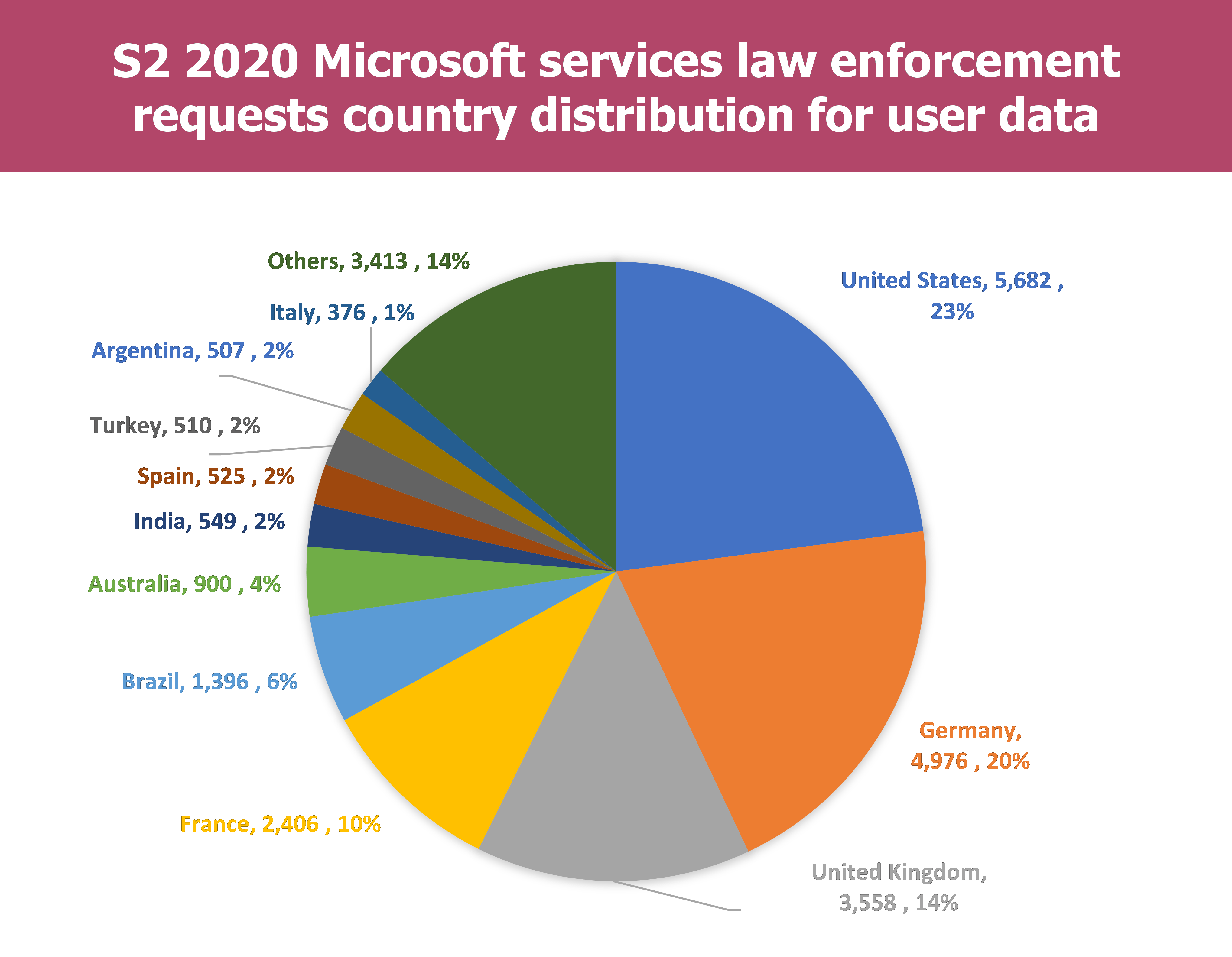 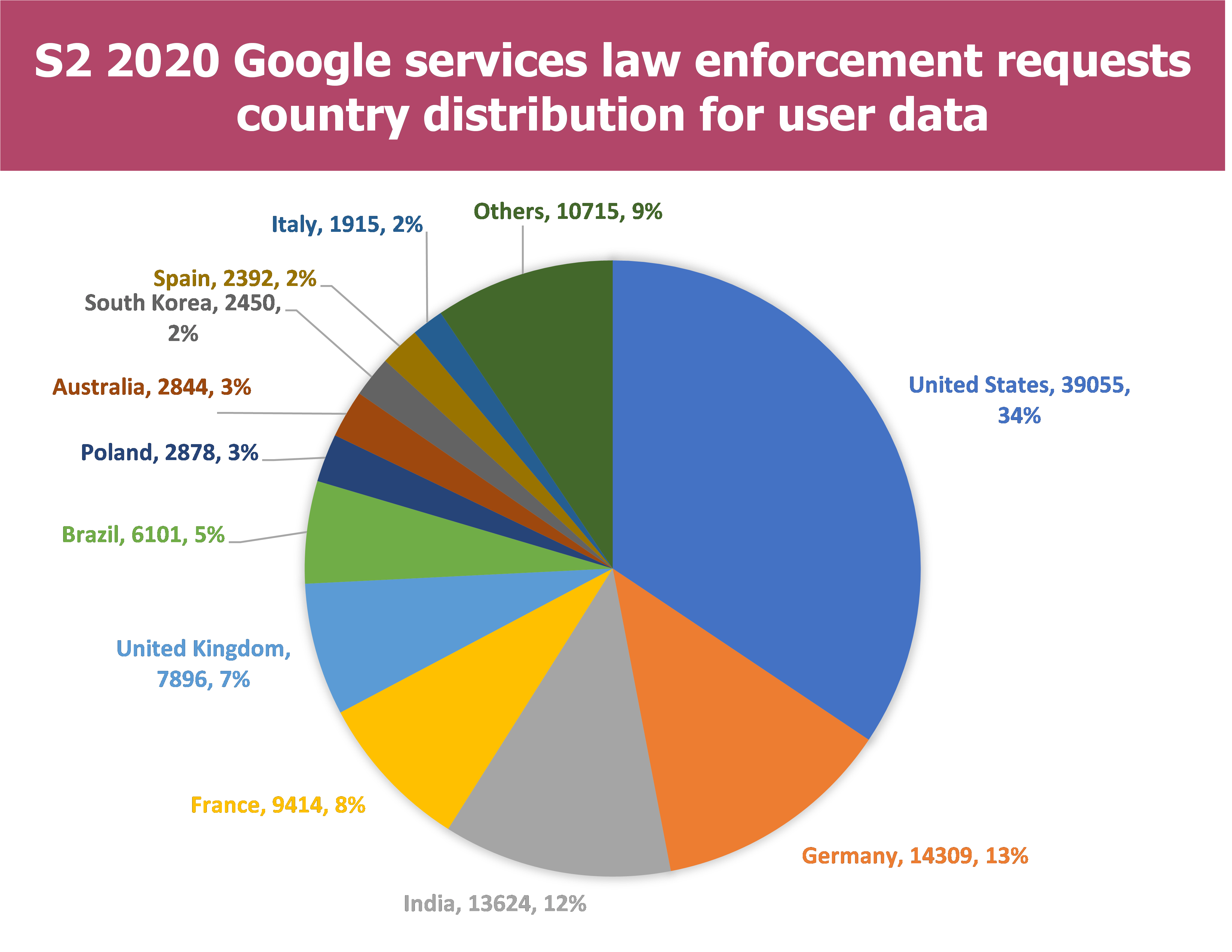 Additionally, we can analyse the number of requests which end up in data being disclosed to the authorities and which proportion of the total requests it represents. In the rest of the article, data disclosure means that the authorities have received data following their requests. 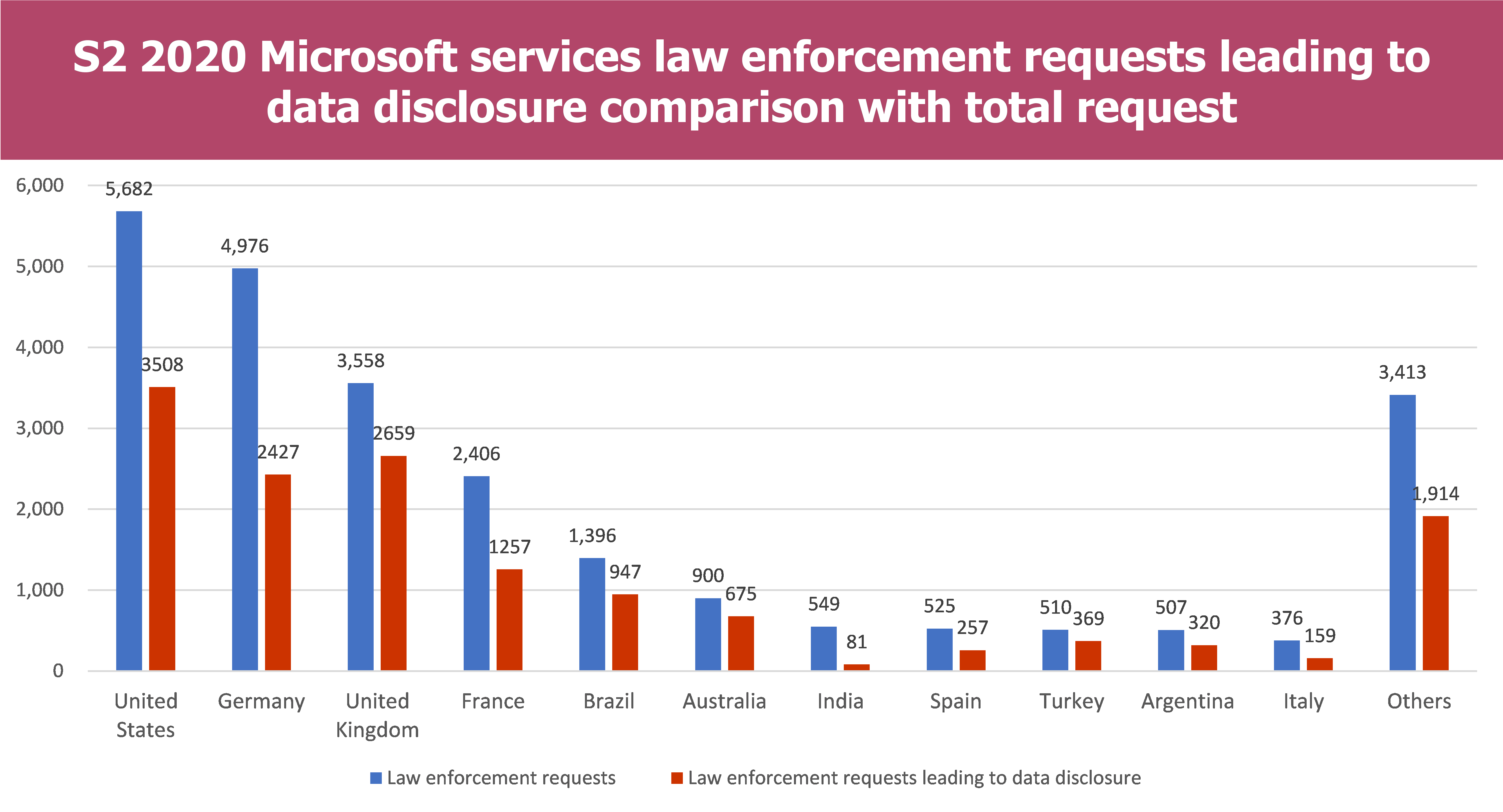 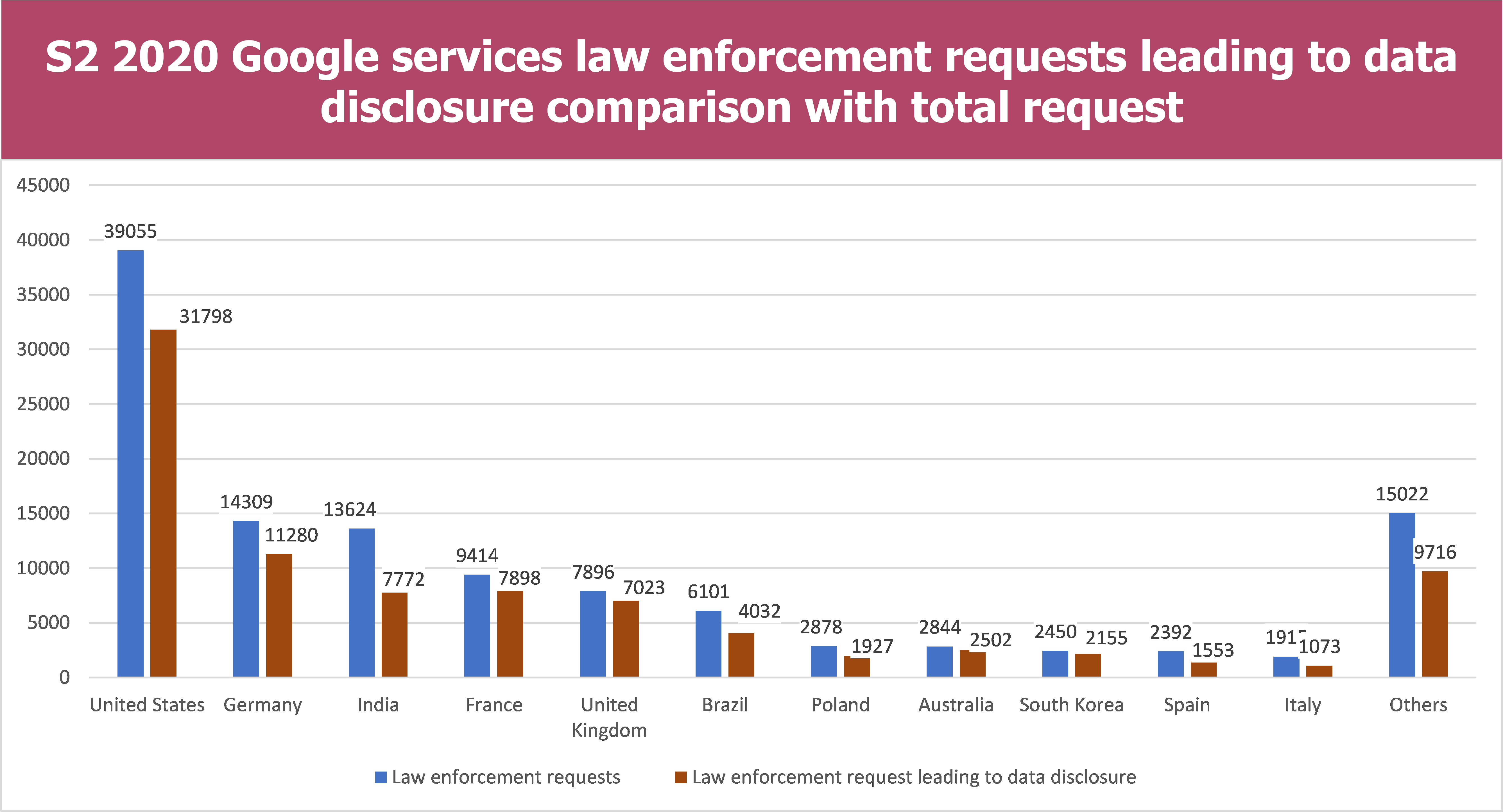 Step back – How the law enforcement requests have evolved since 2013 for Google and Microsoft?

If we compile reports since 2013, we can identify trends regarding data disclosure following C.LO.U.D Act implementation. 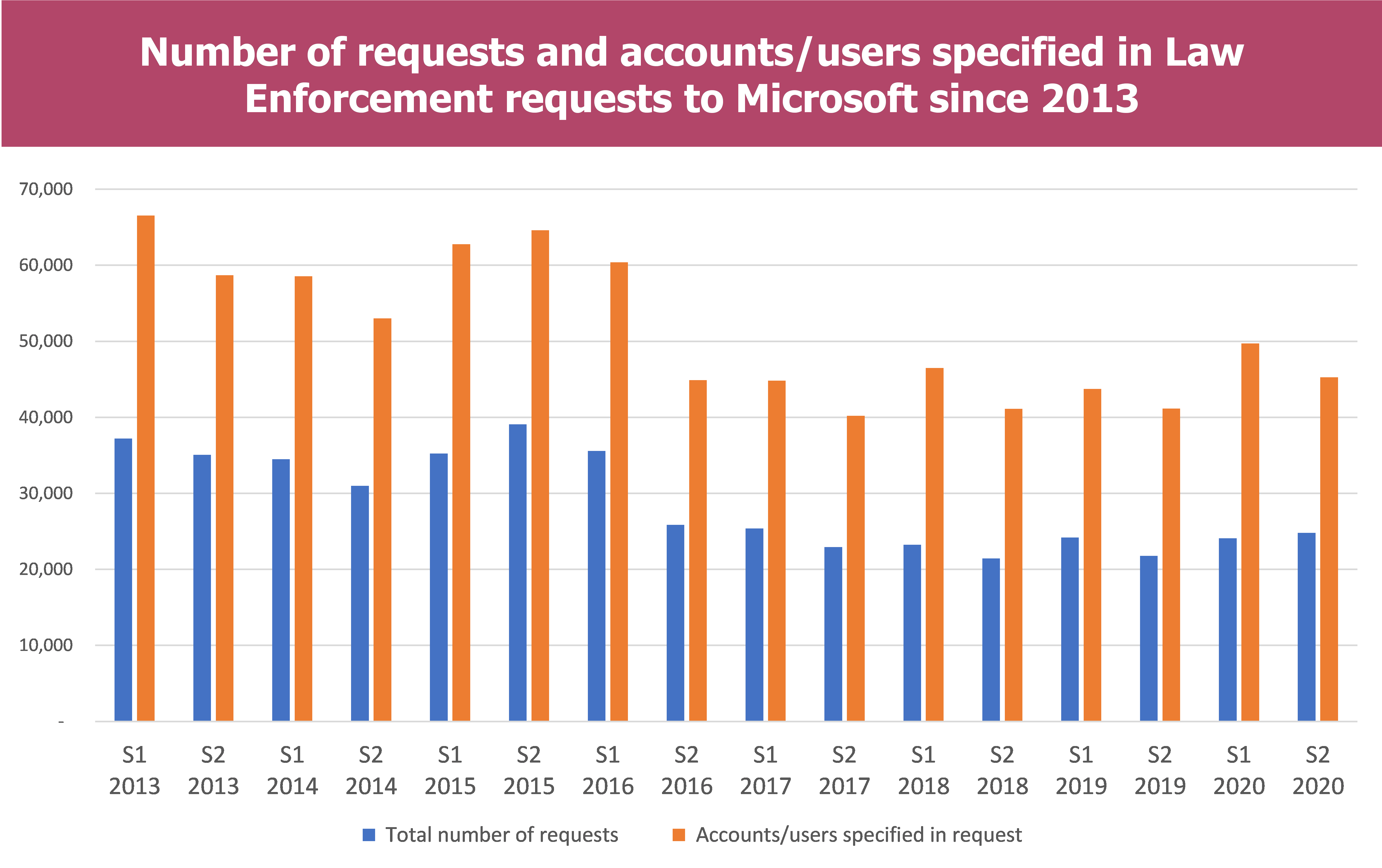 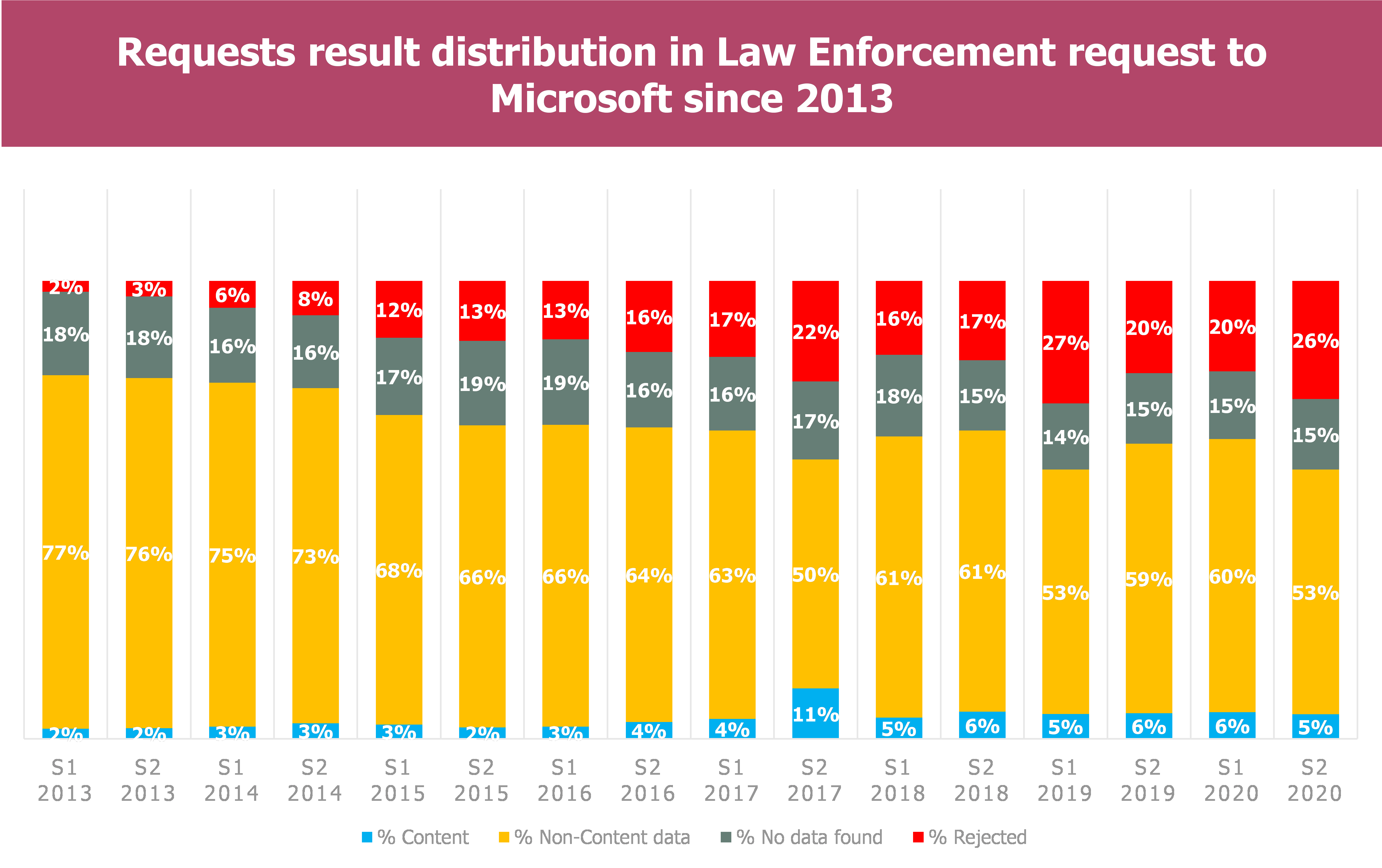 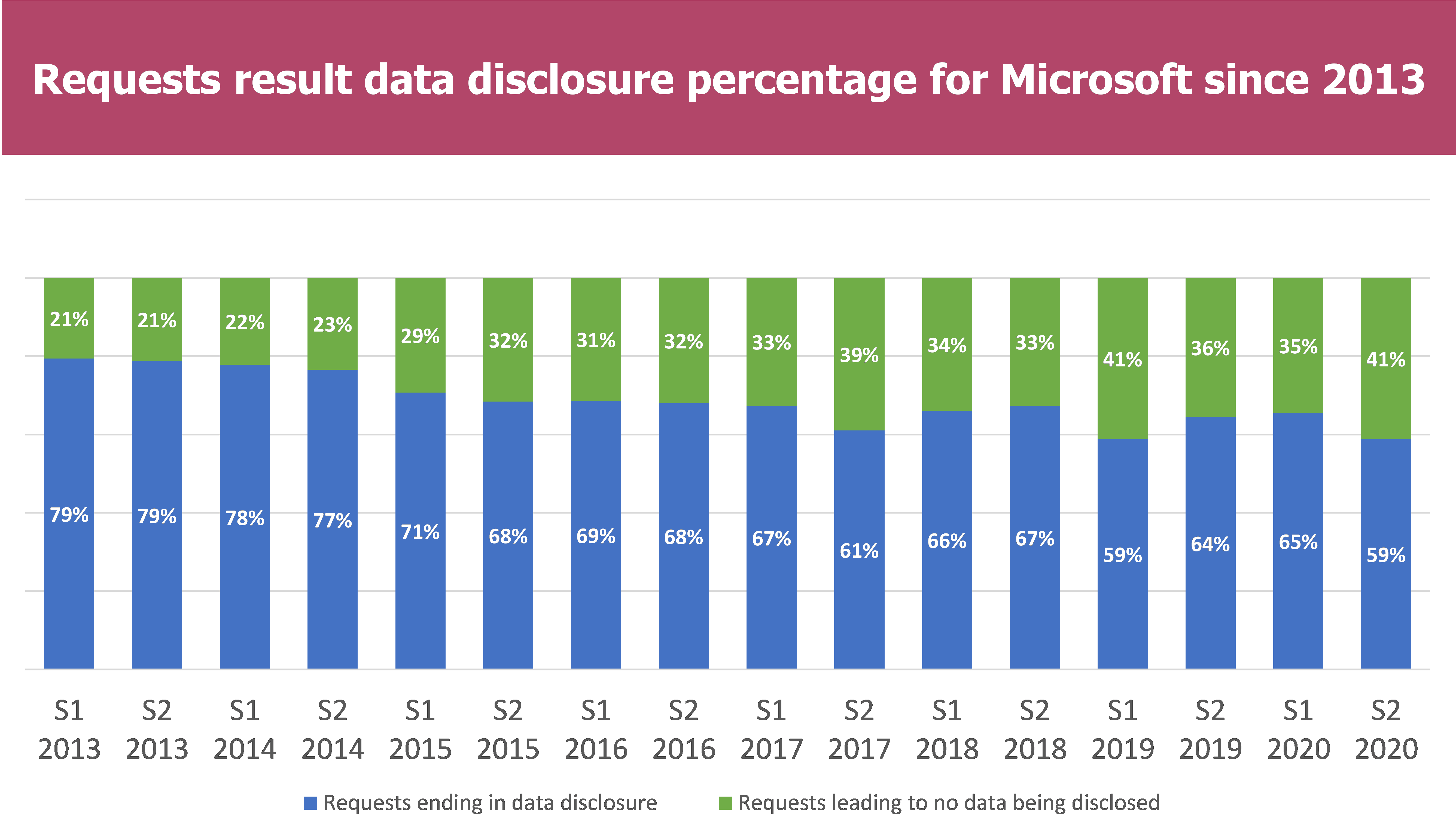 It is worth noting that in the Microsoft report, the requests which are rejected and requests approved but in which no data is discovered are classified in the category “Data request leading to no data being disclosed” 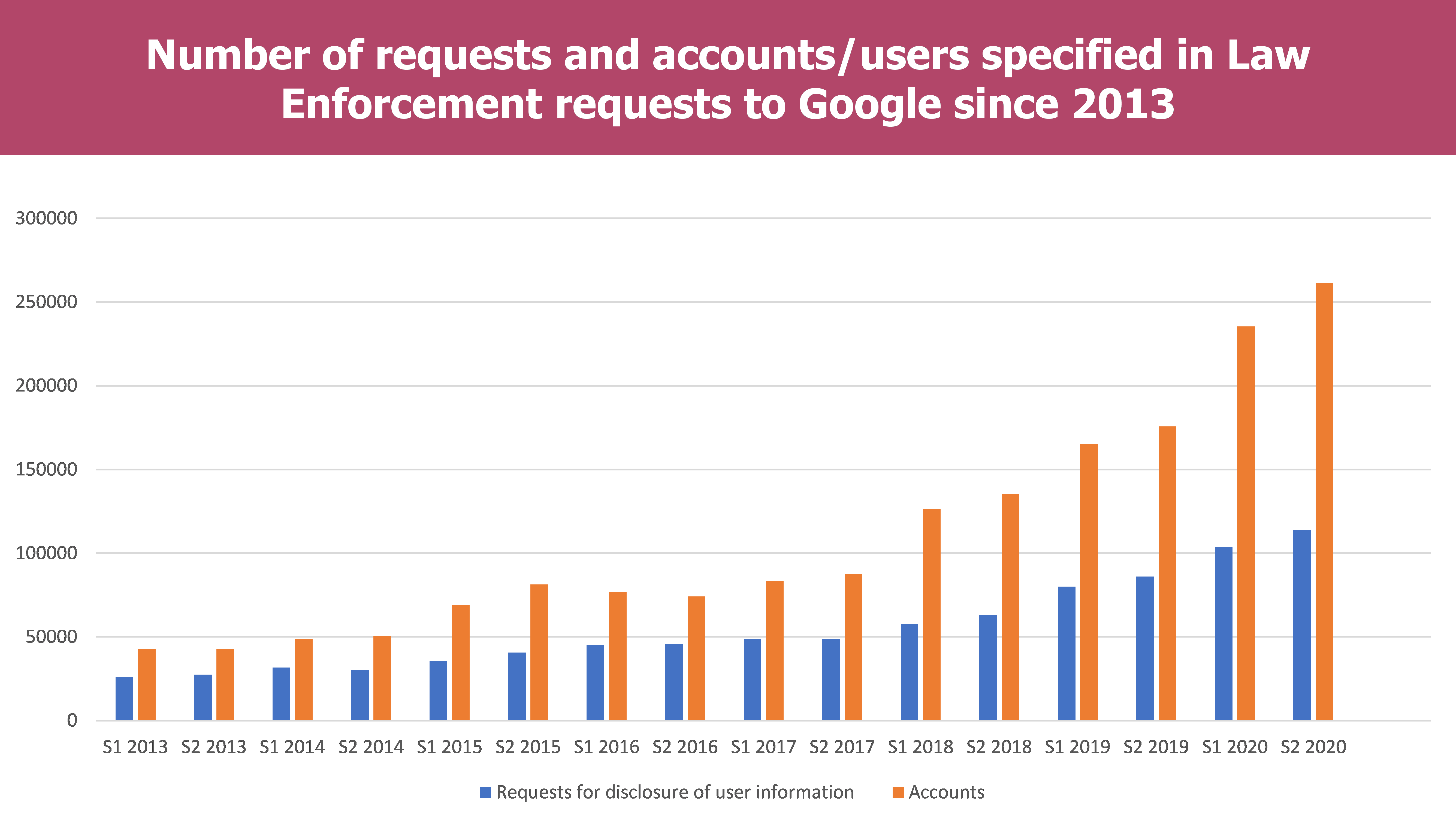 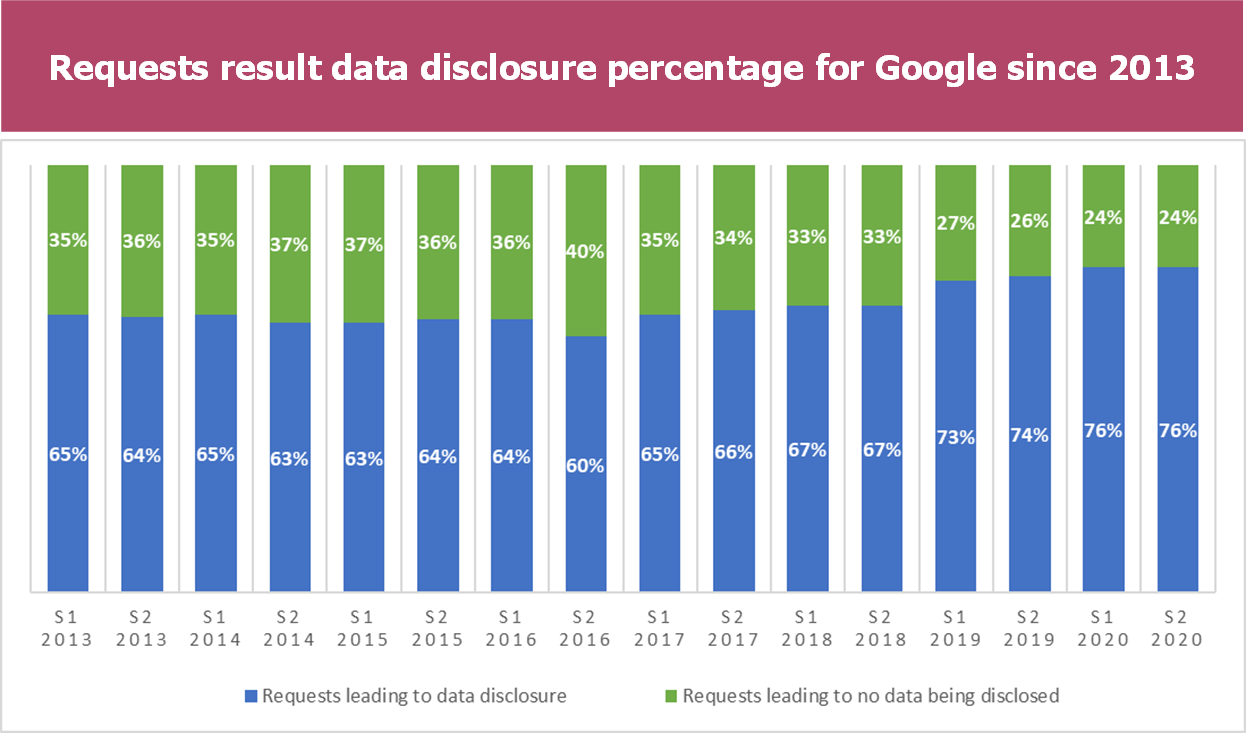 After analysis of the bigger picture, all CSPs are not in the same situation:

Nevertheless, the decision to disclose the information is in the hands of the legal institutions and not the CSPs’ (even if it can contest the request). Therefore, the CSPs’ cannot be held responsible for the amount of data they disclose to the authorities through legal means.

Additionally, even if law enforcement requests are over thousands every semester and tens of thousands of users, this remain a tiny part of the total amount data treated by main Cloud Providers. The data access procedure remains exceptional. The requests mainly concern logins and metadata, there is no proven case of industrialized espionage with mass data recovery.

Finally, keep in mind that these statistics cannot be challenged or aggregated with other sources. It is necessary to underline that this is only at the goodwill of the Cloud Service Providers to disclose the data and the reports, so it should be taken with a grain of salt.

At least, the notion of trusted Cloud remains key for every Companies, Cloud Providers as well as authorities tend to get more involved into the subject as evidenced by the Thales and Google new partnership to build a sovereign Cloud Offer or the planned evolution of ANSSI’s SecNumCloud qualification.

303432083383clouddigital privacy
Prev post Creating a relationship of trust with your executive committee: step 3, make the transformation a reality!
Next post The evolution of the NIST password complexity rules: a mandatory step before a passwordless world?

Artificial Intelligence soon to be regulated?