The evolution of the NIST password complexity rules: a mandatory step before a passwordless world?

Using passwords introduces both a large attack surface (phishing, brute force, password spreading, rainbow table, etc.) and a poor user experience. As a result, passwords have been denounced in favour of passwordless technologies for several years. However, passwords remain commonly used due to both technical and human factors and are likely to remain so for the next few years.

What should we do with passwords until they are no longer in use? How can we minimise the impact of what is the main sticking point in the user experience, whilst improving the security posture of our organisation?

Why are passwords so common?

Since ancient times, passwords have been used as the means of entry to secret clubs and underground factions. The historical access management system of “if I have the secret, then I have the right to entry” has since transformed into a way of proving one’s identity – “if I have the secret then I am who I say I am”. Inserting characters in a certain order known only to the user with right of access, thus has become the solution to allow them to prove their identity.

Although the weaknesses of this system were quickly realised, if the computer systems were not connected and therefore, they required physical access, the attack surface remained limited in comparison. The password has therefore become a pillar of IT security and is used in almost all services requiring user management.

However, the arrival of networks (the Internet, in particular) and the resulting growth in exposure has turned password-related security weaknesses into real vulnerabilities.

How did we come to burden the user with such complexity? 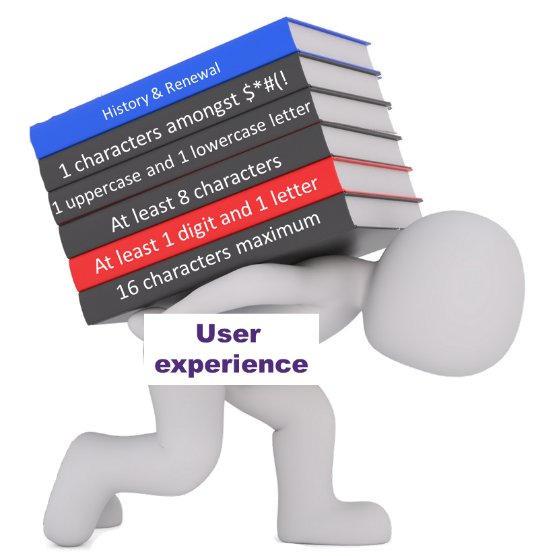 The number of possible attacks on passwords has gradually led security experts to increase the number of safeguards designed to protect passwords.
As a result, a certain number of measures are now taken to secure passwords and their associated processes, making the user experience even more complex. For instance:

These rules, largely based on past National Institute of Standards and Technology (NIST) recommendations, NIST.SP.800-63-2, 2015, and that could be found in most of framework (UK, French, etc.) negatively impact the user experience. Often unintuitive and different from one service to another, users sometimes find it challenging to understand them: lack of clear explanations on the expected complexity, no display of incorrect attempts remaining before the account is locked, or variations in access channels resulting in differing experiences (accessibility of some special characters different from one terminal to another, for example: the “§” character on an iPhone or an iPad). 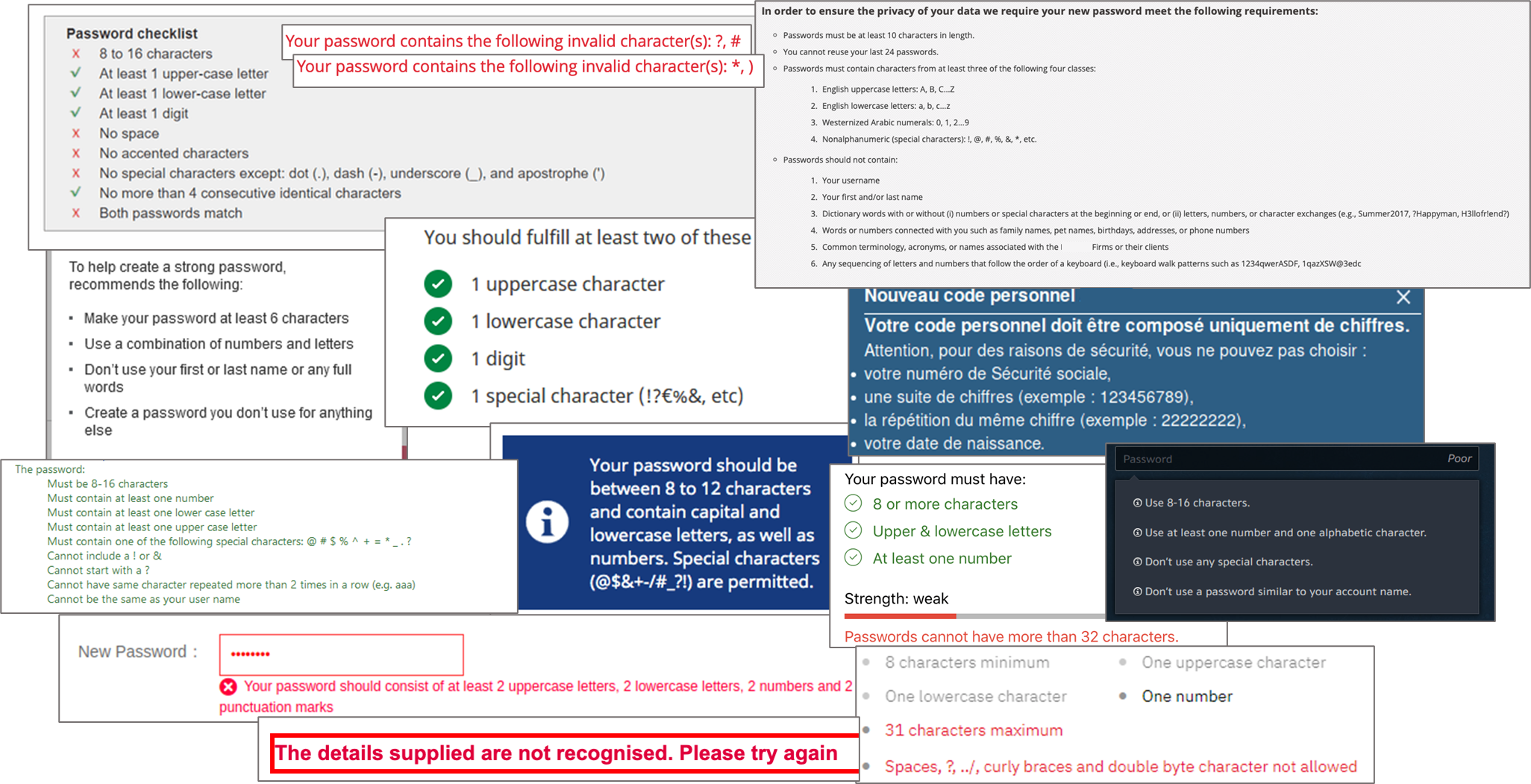 And is it effective?

The very principle on which the password is based, the shared secret, leads to two attack vectors:

Attackers can then directly retrieve the password, ignoring its complexity (except for the length for brute force and storage if using a recent, robust, and regularly updated hash protocol).

The volume of human beings in the system and their capacity to make mistakes has an even greater impact:

If the user provides his password to the attacker, it does not matter if it is 60 characters long or consists of letters from different alphabets.

The complexity of the password has no influence on the most common types of attacks, and therefore only causes inconvenience to the user. 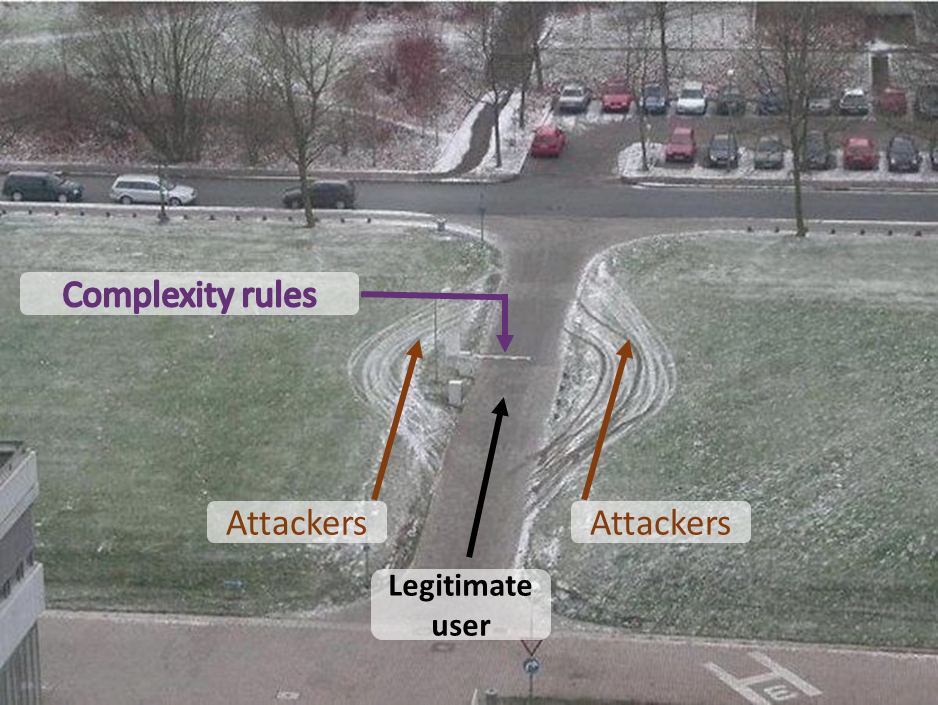 As password issues are not new, there are several possible solutions that can be used in conjunction to reduce the problems and their impacts. The delegation of authentication to third-party services (social login, enterprise IAM, etc.), and the implementation of Single Sign-On have facilitated user experience and limited password replay/transitions and places where the password is stored at rest.

In addition to these solutions, which are already proven and widely deployed, and in anticipation of being ready to enter the passwordless world, which alone is a huge project, NIST and other frameworks recently revised their recommendations regarding the required complexity around passwords (NIST.SP.800-63b, 2017, NCSC UK, Password policy: updating your approach, 2018 for example).

So, from a user point of view, the constraints on passwords have been reduced to a minimum number of characters (8) and the rejection of common/compromised passwords. In exchange, user-facing measures offering more freedom to the user are often recommended:

These new recommendations aim to guide users towards the use of longer and more random passwords by reducing constraints. They can be accompanied by the raised awareness and usage of safe passwords, preventing the user having to remember too many passwords.

The remaining recommendations, mandatory to ensure security levels are not reduced, reinforce some of the aspects mentioned above. Those measures also aim to strengthen transmission (encryption, etc.) and storage (hashing, salting) to increase the level of security of the company’s activities and to prevent the use of certain practices that lower security (use of secret questions for password reset, etc.).

If the elimination of the password is a goal, its eradication is far from complete. It is necessary, before reaching this goal, to implement measures that aim to secure user data (for example by implementing multi-factor authentication on sensitive services) while facilitating the process and users to protect themselves. This includes the implementation of elements that prevent the user from logging in too often or creating too many passwords, but also by redesigning the complexity of passwords in order to increase the randomness, and by upgrading the technical means of transmission and storage.

Using existing processes to prepare for future changes is also essential. For example, redesigning the password recovery path to move the user toward passwordless authentication can help make a smooth transition to greater security while improving the user experience.

IAMNISTpassword
Prev post The C.L.O.U.D. Act: How to make the data “un-territorial”?
Next post Cyber-attacks: what are the risks for backups and how to protect yourself?