Artificial Intelligence soon to be regulated?

Since the beginning of its theorisation in the 1950s at the Dartmouth Conference[1] , Artificial Intelligence (AI) has undergone significant development. Today, thanks to advancements and progress in various technological fields such as cloud computing, we find it in various everyday uses. AI can compose music, recognise voices, anticipates our needs, drive cars, monitor our health, etc.

Naturally, the development of AI gives rise to many fears. For example, that AI will make innacurate computations leading to accidents and other incidents (autonomous car accidents for example), or that it will lead to a violation of the personal data and could potentially manipulate that data (fear largely fuelled by the scandals surrounding major market players[2] ).

In the absence of clear regulations in the field of AI, Wavestone wanted to study, for the purpose of anticipating future needs, who are the actors at the forefront of publishing and developing texts on the framework of AI, what are these texts, the ideas developed in them and what impacts on the security of AI systems can be anticipated.

In the body of texts relating to AI regulation, there are no legislative texts to date [3][4]. Nevertheless, some texts generally formalize a set of broad guidelines for developing a normative framework for AI. There are, for example, guidelines/recommendations, strategic plans, or white papers.

They emerge mainly from the United States, Europe, Asia, or major international entities: 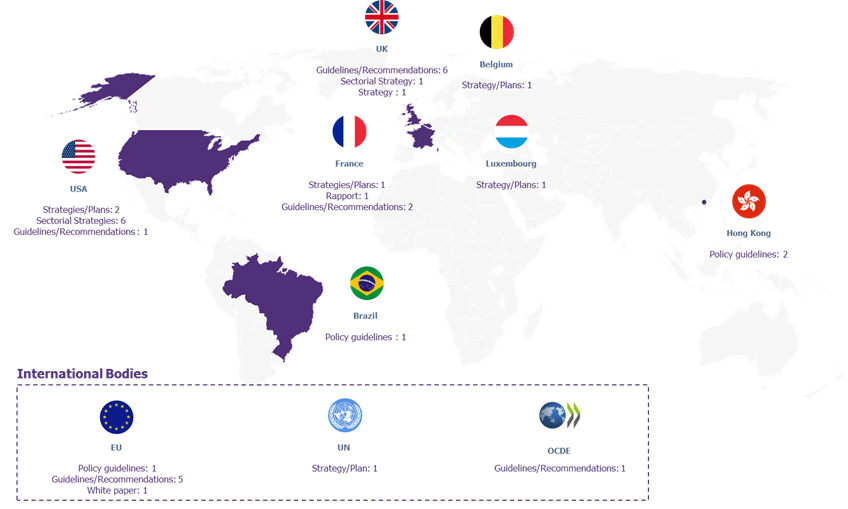 And their pace has not slowed down in recent years. Since 2019, more and more texts on AI regulation have been produced: 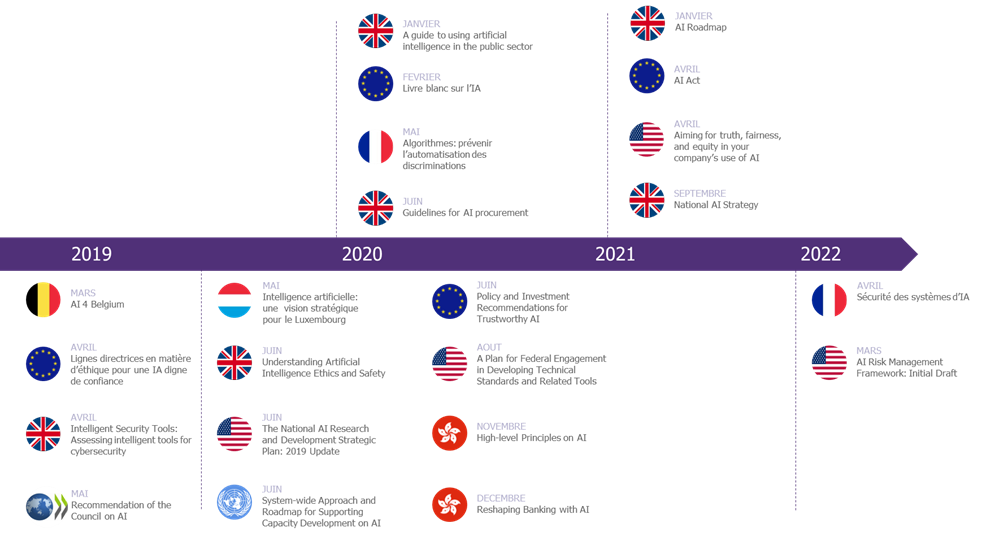 Figure 2 Chronology of the main texts

The texts are generally carried by two types of actors:

At the EU level, decision-makers such as the European Commission or influencers such as ENISA are of key importance in the development of regulations or best practices in the field of AI development. 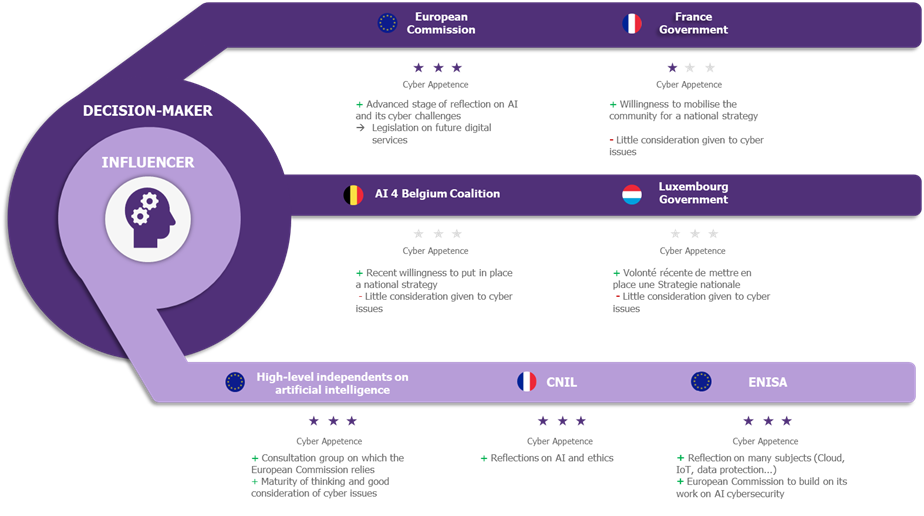 In general, the texts address a few different issues. For example, they provide strategies which can be adopted or guidelines on AI ethics. They are addressed to both governments and companies and occasionally target specific sectors such as the banking sector.

From a cyber security point of view, the texts are heterogeneous. The following graph represents the cyber appetence of the texts:

What the texts say about Cybersecurity

As shown in Figure 4, a significant number of texts propose requirements related to cyber security. This is partly because AI has functional specificities that need to be addressed by cyber requirements. To go into the technical details of the texts, let us reduce AI to one of its most uses today: Machine Learning (Details of how Machine Learning works are provided in Annex I : Machine Learning).

Numerous cyber requirements exist to protect the assets support applications using Machine Learning (ML) throughout the project lifecycle. On a macroscopic scale, these requirements can be categorised into the classic cybersecurity pillars[6]  extracted from the NIST Framework[7] :

The following diagram shows different texts with their cyber components: 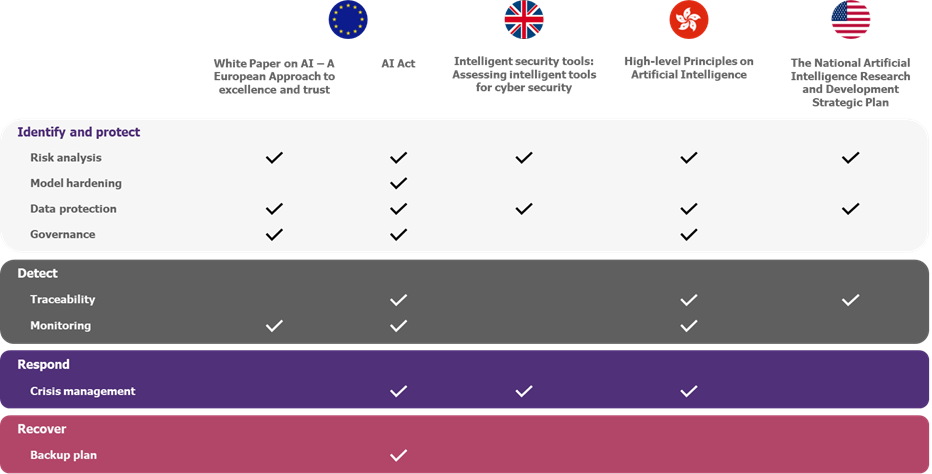 In general, if we cross-reference the results of the Figure 6 with those of the study of all the texts, it appears that three requirements are particularly addressed:

It is likely that these points will be present in the first published regulations.

The AI Act: will Europe take the lead as with the RGPD?

In the context of this study, we looked more closely at what has been done in the European Union and one text caught our attention.

The claim that there is no legislation yet is only partly true. In 2021, the European Commission published the AI Act [8] : a legislative proposal that aims to address the risks associated with certain uses of AI. Its objectives, to quote the document, are to:

The AI Act is in line with the texts listed above. It adopts a risk-based approach with requirements that depend on the risk levels of AI systems. The regulation thus defines four levels of risk:

Each of these levels is the subject of an article in the legislative proposal to define them precisely and to construct the associated regulation.

Figure 7 The risk hierarchy in the IA Act[9] 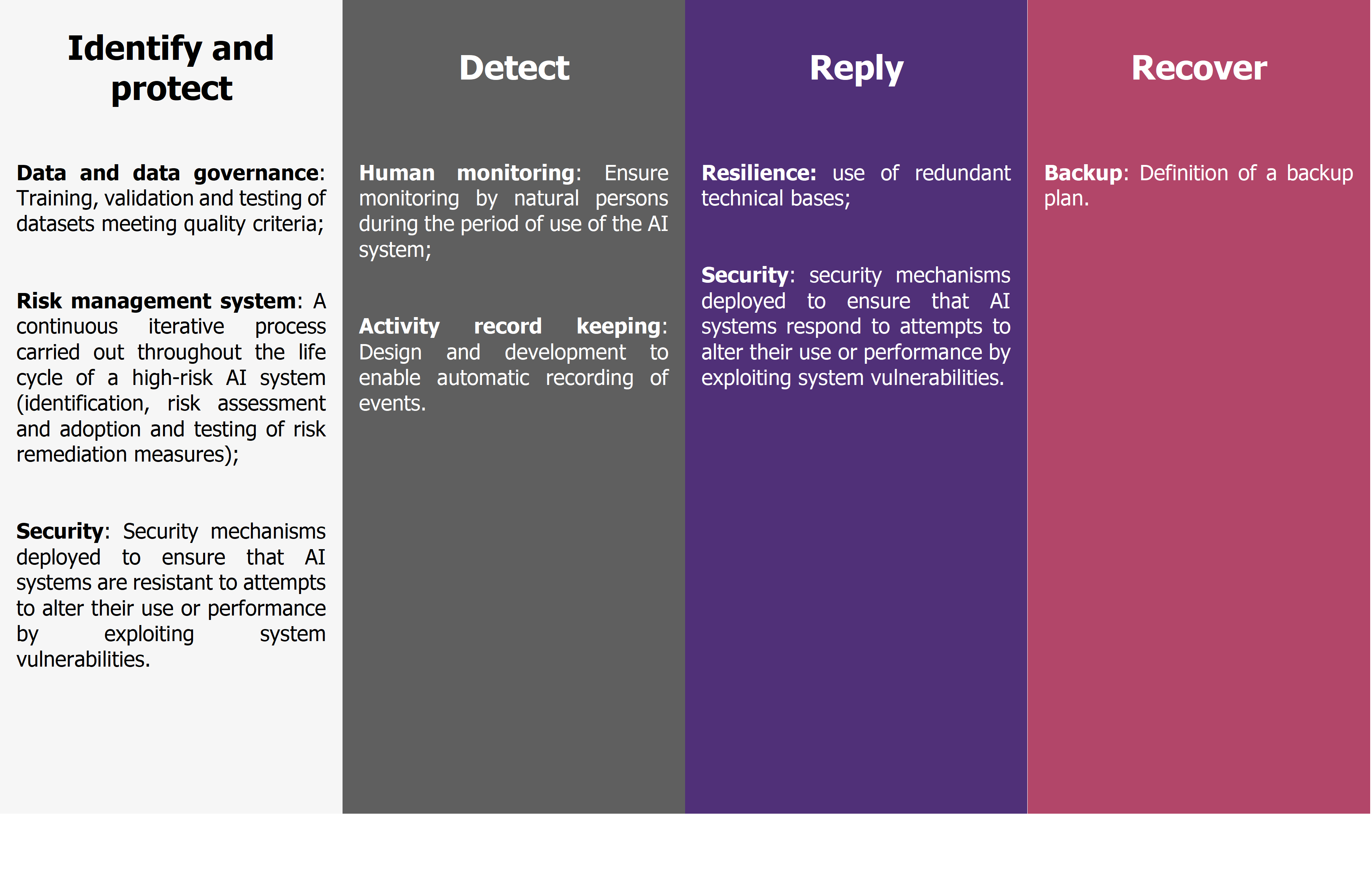 Even if the text is only a proposal (it may be adopted within 1 to 5 years), we note that the European Union is taking the lead by proposing a bold regulation to accompany the development of AI, as it is with personal data and the RGPD.

What future for AI regulation and cybersecurity?

In recent years, numerous texts on the regulation of AI systems have been published. Although there is no legislation to date, the pressure is mounting with numerous texts, such as the AI Act, a European Union proposal, being published. These proposals provide requirements in terms of AI development strategy, ethics and cyber security. For the latter, the requirements mainly concern topics such as cyber risk management, monitoring, governance and data protection. Moreover, it is likely that the first regulations will propose a risk-based approach with requirements adapted according to the level of risk.

In view of its analysis of the situation, Wavestone can only encourage the development of an approach such as that proposed by the AI Act by adopting a risk-based methodology. This means identifying the risks posed by projects and implementing appropriate security measures. This would allow us to get started and avoid having to comply with the law after the fact.

Machine Learning (ML) is defined as the opportunity for systems[10] to learn to solve a task using data without being explicitly programmed to do so. Heuristically, an ML system learns to give an “adequate output”, e.g. does a scanner image show a tumour, from input data (i.e. the scanner image in our example).

To quote ENISA[11] , the specific features on which Machine Learning is based are the following:

Generally, the life cycle of a Machine Learning project can be broken down into the following stages: 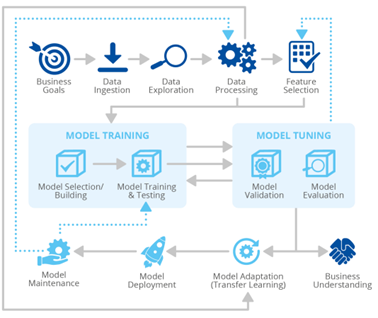 [1] Summer school that brought together scientists such as the famous John McCarthy. However, the origins of AI can be attributed to different researchers. For example, in the literature, names like the computer scientist Alan Turing can also be found.

[2] For example, Amazon was accused in October 2021 of not complying with Article 22 of the GDPR. For more information: https://www.usine-digitale.fr/article/le-fonctionnement-de-l-algorithme-de-paiement-differe-d-amazon-violerait-le-rgpd.N1154412

[3] AI does not escape certain laws and regulations such as the RGPD for the countries concerned. We note for example this text from the CNIL: https://www.cnil.fr/fr/intelligence-artificielle/ia-comment-etre-en-conformite-avec-le-rgpd.

[4] Except for legislative proposals as we shall see later for the European Union. The case of Brazil is not treated in this article.

[5] This list is not exhaustive. The figures given give orders of magnitude on the main publishers of texts on the development of AI.

[6] We have chosen to merge the identification and protection phase for the purposes of this article.

[9] Loosely based on : Eve Gaumond, Artificial Intelligence Act: What is the European Approach for AI? in Lawfare, June 2021, available at: https://www.lawfareblog.com/artificial-intelligence-act-what-european-approach-ai

[10] We talk about systems so as not to reduce AI.

[13] Note that some titles have been translated in English.

Ransomware: Inside the former CONTI group